Often considered a “second-class” European destination, Poland has everything it takes for an authentic experience… that will spare your wallet!

Poland is the home of Solidarność (solidarity in Polish) and was part of the Velvet Revolution, the non-violent movement that led to the fall of the Iron Curtain splitting Eastern and Western Europe, in 1989). Sadly, the country is mostly known for the Auschwitz and Birkenau concentration camps from World War II.

After seeing many of its cities destroyed during the Second World War, Poland accepted the Soviet annexation. But most people know what the country is like to this day, following a long – and complex – history.

Youth hostels are quite easy to find in the biggest Polish cities. Cost is approximately $15-20 / night in most of the country.

For more luxury, you can find 4 or 5-star hotels starting at $70 / night in Krakow. In Warsaw, Gdańsk and Zakopane, the price for a similar hotel room is approximately $120-130 / night… even in the middle of July. In comparison, equivalent accommodation would go for 1.5 or even 2 times the price in London or Paris!

The Polish diet is mostly potato-based. If you are not afraid of eating lots of carbs, you will eat plenty and for cheap. A 3-course meal (appetizer, main course, dessert), with a local beer, usually goes for less than $20. Even less if you eat at a Bar mleczny (“milk bar”)! These cafeteria-style restaurants are remnants of the communist days and were originally meant to feed workers at a low cost.

Polish pastries, both delicious AND cheap, have nothing to envy to the ones you would find in most European capitals.

Though vodka is mostly associated with Russia, Poland counts many reputable brands. You will find some “plain” (unflavored) and flavored versions (honey, black pepper, quince, cherry, etc.) of the national drink. And since vodka is so affordable over there, you have no excuse not to try different types and brands! Cost for a 750 ml bottle is approximately $10-12 (compared to more than $25 here!). 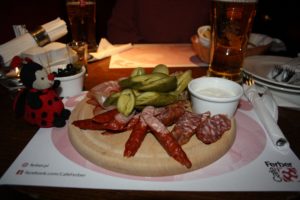 Long-distance transport by bus is both cheap and fast. Same thing for the train, even in first class. Though train is generally a bit slower, it usually offers more comfort to passengers.

In large cities (including Warsaw and Krakow), tramways, subways and public bus are well organized and cost next to nothing. Most of the time, there is a display on board that will help you get off at the right stop. Unless you need to get to the airport, you can easily navigate the cities by foot or public transportation, without having to use taxis.

Nightlife: Krakow (Kraków) is the place to go!

On top of a variety of bars and nightclubs, you will find the amazing – and vast – Wawel Castle in this city. Krakow is also the gateway to reach Auschwitz. The city was spared by World War II and numerous beautiful buildings can be found around the main square of the Old Town (Rynek Główny), the heart of the Cracovian life.

From the Gothic Wilanów palace to some Baroque elements (Sigismund’s Column, St. Hyacinth’s Church), without forgetting some Neo-Classical (the Palace on the Water, in Łazienki Park) and some Modern (the library of the Warsaw University and the Złote Tarasy – Gold Terraces – shopping mall), the city has a lot to offer for the architecture lovers. At night, hang out at one of the bars, cafés or restaurant of the Trakt królewski (Royal Route).

The Tatra Mountains is waiting with its ski resorts. You can also get a funicular ride up Mt Gubałowka and enjoy the breath-taking panorama (if the weather cooperates!). From there, you can see the cross on top of the mythical Mt Giewont, a mountain at the heart of many Southern Poland legends and stories. The Zakopane architecture, named after the city, is cute and inviting. And don’t forget to taste some żurek! This sour, milky like soup is mostly made of root vegetables and served with hard-boiled eggs and thick bacon bites.

The Beach: Gdańsk and the Baltic Sea

In the suburb of Gdańsk, by the Baltic Sea, is Sopot, the Polish beach destination by excellence. Formerly named Danzig, Gdańsk was rebuilt in a style reminiscent of the Dutch style after being nearly entirely destroyed during the Second World War. If you are looking for amber (fossilized tree resin) jewelry and goods, this is the place to shop. For an interesting day trip, get to Malbork by train. From there, you can easily reach the beautiful and fascinating Castle of the Teutonic Order. World War II enthusiast? Head to Kętrzyn to visit the (somewhat macabre) Wolfsschanze (Wolf’s Lair), in the Mazurian forest.

High Season: May to September

“Plus-Size Bulgaria: Vratsa” is the 2nd of a series of posts about my recent trip to Bulgaria. In a little less than 3 weeks, in September and October 2017, I have been around this country and discovered it through 6 different cities. ►►►

The “Strictly Carry-On” Challenge… The Numbers