Well, it’s sure was a busy month of April in the travel news, and that is why I decided to bring back the “plus-size travel news in bulk” concept this week!

From upcoming collaborations to the United Airlines’ latest debacle, without forgetting new gear, like Vaude backpacks and the Happy Air Sofa, here are a few news I considered worth mentioning…!

Since April, I have started contributing to Économies et cie, a personal finance website as of last month. My mission? Share general, money saving, travel tips with the (French-speaking) world!

In other good news, I was asked by London-based LifeSize Magazine to prepare a piece for their upcoming travel series! It’s always an honor to be approached by an award winning, body-diverse magazine for such things! I will share the link on the Facebook page as soon as it comes out, which should be in the coming weeks. 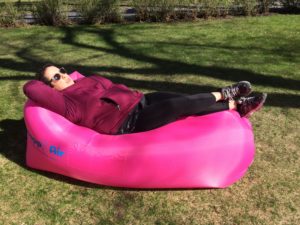 There is a new way to enjoy a moment of comfort when hiking… and it is called the Happy Air sofa! This inflatable device could become your best friend if you decide to pack one on your next outing…!

Sandrine, the woman behind the brand, will be on Dans l’oeil du dragon (French version of Dragons’ Den). You can watch her on Radio-Canada on Monday, May 8 at 8 PM (Eastern) to find out if she was successful at pitching her product to a panel of Canadian business men and women… Best of luck to her and her project!

I will test and review the Happy Air Sofa in the coming weeks on the blog… Stay tuned to find out more!

As usual, summer is my testing and reviewing season… Summer of 2017 won’t be an exception!

I’m thrilled to announce that I have received and will put to the test a Vaude backpack in the coming weeks! A few items of clothing are also on the schedule, along with Leguano barefoot shoes and the foutah towel-scarf-blanket…

Stay tuned to find out more on all this… and more!

Following the “leggings incident“, United Airlines violently removed (now famous) Dr. David Dao from a flight departing from Chicago. This happened after Dao rightfully boarded, but was then asked to give up his seat due to overbooking. Which he refused.

The 69 years old doctor from Kentucky was dragged off an aircraft in a violent manner, as per many videos of the incident filmed by other outraged passengers. (Dr. Dao suffered a concussion, a broken nose, sinuses injuries and lost two of his front teeth in the incident.) 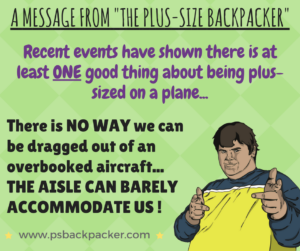 Well, that’s something that could hardly to us, plus-size passengers, as we barely fit the aisle! (For once, design is on OUR side!)

With the holidays coming, I decided to do my part in encouraging local purchasing by spreading the word about a Canadian label, Large Lad Clothing (LLC). #ShopLocal ►►►

The Happy Air Sofa is one of those inflatable sofas/hammocks that have been growing in popularity for the past few summers. I see more of those popping around in parks, beaches and picnic areas around Montreal. ►►►