“Plus-Size Bulgaria: Ruse” is the 3rd post of a series dedicated to my recent trip to Bulgaria. In a little less than 3 weeks, in September and October 2017, I have been around this country and discovered it through 6 different cities. East, West, North and South, I have sampled many different Bulgarian regions and it’s now time to share my adventures and discoveries!

Ruse (or Rousse – Русе in Cyrillic) is usually seen as the gateway to Romania. Too often neglected by travelers, the city definitely has something to offer! As long as you stay for more than a simple “pit stop”… With a population around 150,000, it is a young, bustling city that is worth spending a couple of days in… 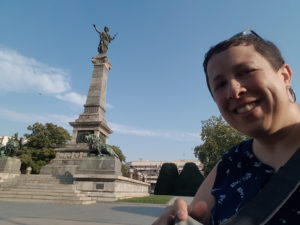 This is where the Monument to Freedom rises. It’s also the heart of the city. This vast park with benches, greenery, trees and fountains is a green gem in the heart of Ruse. A great place to see and enjoy the belle époque architecture of the city. Emanating from Place Svoboda, 18 streets make their way across the city. Not far, another place for a nice stroll: ul Aleksandrovska, the city’s main pedestrian street.

Lonely Planet has described Ruse as if “a little chunk of Vienna had broken off and floated down the Danube“. (It is mostly that comparison that brought me there, actually!) After seeing for myself, I don’t think I could find better words! 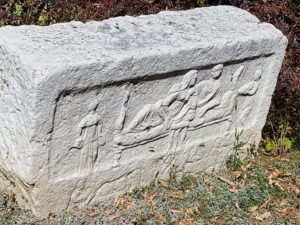 Sadly, there isn’t that much left of Sexaginta Prista (The Port of Sixty Ships). This Roman fortress peaked in 70 AD but was only recently discovered and excavated. The custodian of the ruins personally worked on the excavation of the site. He’s the one who showed me around. An absolute sweetheart with a true passion for his work! For his hard work and a few leva, it’s worth the visit!

The artifacts showcased inside (coins, statues, etc.) are worth checking out! 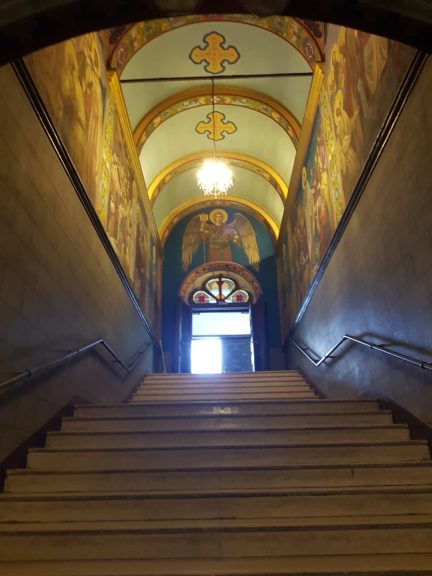 Have you ever seen an UNDERGROUND church? Here’s your chance! Dating back to 1632, it was built that way under the Turk rule which stipulated that churches shouldn’t be “obstructive” construction (read: tall building). Across Bulgaria, a few churches also have stairs that take you below street level, remnants of that Turkish reign era.

Don’t miss the little museum around the side of the church. You will find there amazing painted icons to see up close, along with information about the story of the city and its underground church. I hung out on a bench in the little park around the church for an hour or so. There I met a once famous Bulgarian actress and her dog, and enjoyed some sunlight through the trees.

Probably one of the most famous rivers of Europe. If you go for a stroll by the side of the Danube in the summer, you will find “beach” bars and cafés (closed when I arrived after mid-September) where you can stop to sip on a cold/hot drink of your liking. And enjoy the view, obviously. And on the other side of the Danube Bridge (formerly called The Friendship Bridge), lies Giurgiu and Romania. (Giurgiu is 60-something kilometers south of Bucharest, the Romanian capital.)

After Sofia, the capital, hiking in Vratsa and strolling the Danube in Ruse, I kept on going East to reach the East end of the country: Varna and the Black Sea Coast…

Varna (Варна): third biggest city in Bulgaria and gateway to the Black Sea beaches, a lot of casinos and luxury hotels. Still, in spite of all this luxury, this is a backpackers spot on the budget-traveler route across Bulgaria. ►►►