After 3 years of blogging and with a new trip coming, I started wondering on the pertinence of this blog in the blogosphere, after the years. How I can take it to the next level…?  I quickly realized that being a plus-size person in a so-called “standard” world is STILL quite a challenge.

Not so long ago, plus-size actors and models were nonexistent, in the media and in the entertainment to the fashion industries.  Over the past years, came some kind of a “plus-size rise” thanks to  smart, sassy and curvy ladies like Sara Ramirez (Dr Torres from Grey’s Anatomy) Gabi Gregg (plus-size fashion blogger), Fluvia Lacerda (model) and Amber Riley (Mercedes Jones in Glee), to only name a few. By being successful in fields that were – and still are – virtually closed to more generous bodies, these women opened up the doors to the real world, in which women comes in all sizes, height and shapes.

Then last February, gorgeous plus-size model Ashley Graham graced the cover of the famous swimsuit edition of Sports Illustrated.  Shortly after, she was featured in DNCE’s “Toothbrush” video, along with famous pop star Joe Jonas.

(I guess that compensates for Graham’s “I Am No Angel” campaign with Lane Bryant, meant as a response to Victoria Secret’s angels models.  Have you ever noticed how the pictures of that campaign never showed an inch of cellulite or a single fold or roll of skin and how all the models are perfectly proportioned?)

Since 2015, we have seen models like Tess Holliday become public figures, and ladies like Melissa McCarthy and Project Runway (season 14) winner Ashley Nell Tipton have launched collections that both benefited from coverage in mainstream media outlets…  In the past few years, numerous plus-size fashion bloggers received their (well deserved) share of exposure and/or collaborated with brands and stores to design clothes that would fit a 14+.  Even swimsuits got their share of the “plus-size revolution” with younger looking and sexy designs meant for fuller women…

Plus size men – a.k.a. brawns – also have their own model to look up to in the person of Zach Miko, first plus-size male model to gain notoriety since he became the face of Target’s Big & Tall section.

We came a looooong way since the over-sized muumuus…
But whatever goes up must come down.

Last spring, comedian Amy Schumer became publicly outraged for being featured in the “plus-size bonus pages” of Glamour Magazine as one of the “women who inspires us”.  Why? Because they didn’t bother “asking or letting her know” she would be featured as such. That was the beginning of a wave of positive AND negative reactions towards plus-size acceptance.

Do you really think they asked for Gabourey Sidibe’s permission before they featured her in ANYTHING that was plus-size related…?

Schumer’s claim was that calling her plus-size gave a wrong perception of what being plus-size is to girls and women out there.  She might have been more credible if she wasn’t getting so much fame and making so much money on the back of chubbier ladies by constantly ranting about her size in her sketches.  Basically, it’s OK for her to ACT plus-size, but not OK to be CALLED plus-size by others.  Talk about a double-standard.  #IfiRollMyEyesAnyFurtherTheyWillGetStuckThere 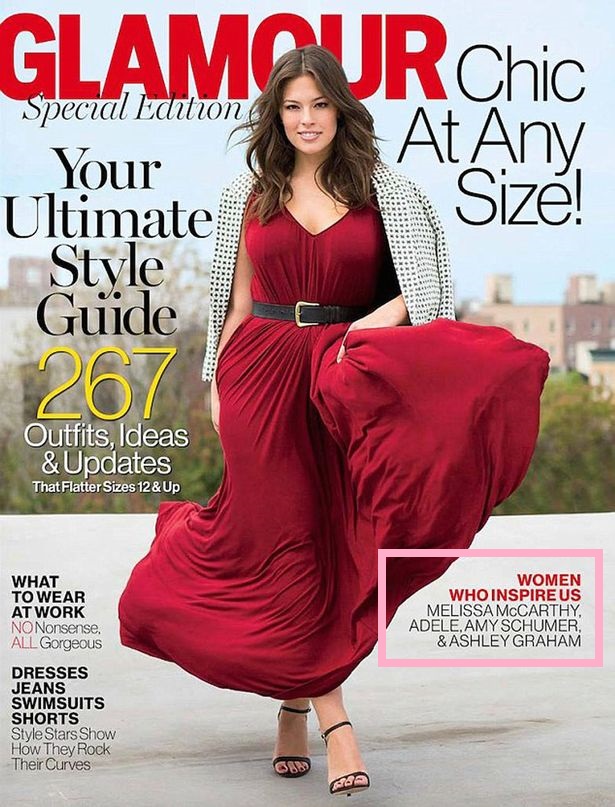 (Guess who lost her “women who inspire us” status almost as soon as she gained it…?)

As if it wasn’t already enough of a challenge to deal with fat-shaming trolls all over social medias, it seems we have to fight to have the right to be in a swimsuit, because we are not what society wants to see…

Remind me how they don’t do squat about people & hashtags praising anorexia (that has one of the highest mortality rate of any psychiatric disorder), bulimia, self-mutilation and other serious AND truly dangerous conditions for the people who suffer from it ?

Note : links in this paragraph lead to French content
I wasn’t spared by the backlash that came after the plus-size rise.  I was recently interviewed for the Journal de Montréal (and the Journal de Québec), the newspaper that has the highest distribution in the province of Quebec.  The (French) article was titled “5 Travel tips for plus-size people” (translation). Whenever I give interviews, I pride myself in remaining positive and constructive in the opinions I express. I share tips that aren’t taking anything from “standard” size people…   (I don’t think you can call something “empowering” if the benefits you get from it comes from taking away from others.)  Yet, all the comments, both on Facebook and the newspaper website, turned around the usual stereotypes: plus-size people are fat (tell me something I don’t already know!). We stink of sweat. If we ate less, we would have more money to travel or buy premium class seats on plane. We should lose weight, we abuse healthcare, obesity is a choice… Someone even commented that we should stay home,  that way we won’t be bothered, most likely in response to the quote in which I mention the importance of being zen and confident when we travel, because our bigger bodies might cause reactions in some parts of the world.

So… Are Body Positive & Plus-Size Blogs Still Pertinent or What…?

By getting visibility, plus-size people got the criticism – sometimes pure hatred – that comes with being in the public eye.  They are still pertinent. To balance things out. And for the rest of the world to see that, planet-wide, plus-size people in general – women in particular – are just like everybody else. Plus-size bloggers are more pertinent than ever to show that:

We are no freak show.  We don’t want to be categorized as a fetish or kinky.  We don’t necessarily want or need to lose weight.  We are more than “such a pretty face” or “pretty for big girls”.

We want to be represented as more than “the fat friend” on TV and in the movies;  we can be sporty, seductress, funny, dramatic, as complex and versatile as any other woman could be.

We want to live lives that are full of adventures and fulfilled dreams. We refuse that our body size stands in the way of that.

We are no so different after all, aren’t we?

A Chat with Jen From “Travel with Curves”

Jen, the blogger behind Travel With Curves, has been part of my “plus-size travel bloggers world” since she started, back in the spring of 2015. Her arrival in the blogosphere was a relief… I was so happy not to be alone anymore! READ MORE… ►►►