“Plus-Size Bulgaria: Veliko Tarnovo” is the 5th post of a series dedicated to my recent trip to Bulgaria. In a little less than 3 weeks, in September and October 2017, I have been around this country and discovered it through 6 different cities. East, West, North and South, I have sampled many different Bulgarian regions and it’s now time to share my adventures and discoveries!

Veliko Tarnovo (“The Great Tarnovo” / Велико Търново): nested in the heart of the Northern Central Bulgaria mountains, this green and lush city is the second smallest town I visited during my Bulgarian adventure (the smallest one being Vratsa).

The city of Veliko – like many travelers call it – spread across a few hills and around the river Yantra. Formerly a strategic stop on the trade route, the city was the capital of the Second Bulgarian Empire (1185-1396) and home of its tzars. 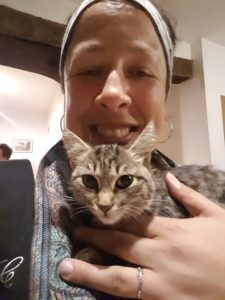 A Hostel With Free Breakfast, Dinner and…
Free Beer!

Welcome to Hostel Mostel. A safe, clean hostel where both breakfast and dinner are free (with a complimentary glass of beer with the evening meal). Did I mention the freshly fried mekitsi (Bulgarian sweet’n’salty donut like fried dough), available most mornings?

The young man working the overnight shift was super nice and helpful. He helped us figure out a car rental (more details below) but also help me with bus schedules, laundry… He even made sure I could have breakfast before my – very early – bus, the morning I left (in spite of my departure being way before breakfast time). Oh yes, and he’s taking very good care of the resident stray kitten that everybody falls in love with (myself included).

As soon as I arrived and set up in my room, Ludovic, from France, immediately offered to sleep on the top bunk to leave me the bottom one. (One thing you might not know about me: I am terrified of sleeping on the top bed of a bunk-bed!) Right at dinner, we all mingled and started chatting in English and French around the table. Everybody was just so nice and welcoming!

The night I arrived, part of the dinner chatter was around renting a car to reach Buzludzha, a.k.a. “The UFO”. 80 km outside Veliko Tarnovo, on top of a hill, stands this former communist celebration and gathering building in the shape of a flying saucer.

Around the dinner table, Pete, from the US, gathered a group of about 9 travelers, from Germany, New Zealand, Australia & France (I’m probably forgetting some) who would split the car rental fees. 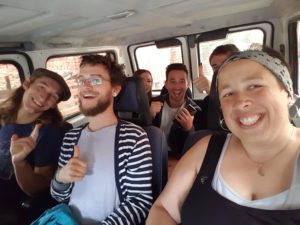 The next morning, Pete officially became the driver of… the Aquavan, with Ludovic as official navigator. Don’t be fooled: these 80 kilometers (50 miles) are not an easy drive! Nasty, shoelace mountain roads with thick fog made the experience quite eerie for us, passengers… And exhausting for our driving team!

When we parked at Buzludzha, we couldn’t really see it through the fog. Then as we slowly started to climb the stairs… this : 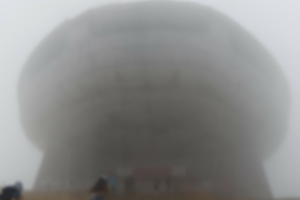 I couldn’t make it in for lack of a trustworthy rope I could use to rappel and slide myself inside (I’m truly unlucky with these abandoned communists buildings!). But here are some pictures that Pete, our driver, took…

What are the chances…?

When we came back, our dorm smelled like old shoes filled with stinky cheese. #Gross And that’s when I shared the story of the drunk guy from the Yo-Ho Hostel in Varna. And that he would probably be the type of guy to be so careless in a dorm and not care about the smell of his shoes ruining the whole place.

As I finished telling Ludovic the story… this guy comes out of for a cigarette. IT WAS THE DRUNK GUY FROM VARNA! I’m over 200 km away from where we first crossed path… and here he was, in my very hostel dorm, this time quiet… but with stinky shoes! #CoincidenceYouSaid?

The fortress bears the name of the hill it was built on. Why complicate things unnecessarily! I have seen so many words I couldn’t pronounce – or even read! – while in Bulgaria, this one’s a relief, haha!

The day I visited was grey and rain-ish, so I had the fortress nearly to myself. Considering that is one of the main attractions in Veliko Tarnovo, that was awesome!

It’s probably one of the best places to enjoy a panoramic view of Veliko Tarnovo. On some nights, there is also a light and sound show projected on the fortifications and buildings of the fortress. (Listen to the announcement when you visit the site, you will know all the details.)

On rainy, humid days, make sure to wear proper shoes as the stones making the pavement and sidewalks can get slippery when wet.

Most of the visit is outside except the Patriarchal Cathedral of the Holy Ascension of God. Don’t be fooled; it’s called “cathedral”, but it is, in fact, a tiny chapel, located top, center of the fortified site. You can have a seat there and check out the frescoes, painted in the 1980s. The ruins of an early Christian (pre-325 A.D.) lie beneath the current construction

☺ A very special thanks to Pete Gardner, the official mountain driver and organizer of the Aquavan! Thanks also for letting me share your (awesome) pictures of the inside of Buzludzha! Ludovic, Samba, Marlou, Max… Thanks for such fun times! ☺

After a short – and fulfilled! – stay in Veliko Tarnovo, I kept on heading West, back to Sofia… One more city before I hit the end!

The 6th – and final – installment of “Plus-Size Bulgaria” will be dedicated to Plovdiv, the second biggest city in the country and last stop before reaching Sofia for the end of a fantastic adventure!

Tomorrow is the big day. I will fly out of Montreal all the way to Sofia, Bulgaria! Needless to say how thrilled I am! One year after leaving for Peru, I fly out again, on the exact same day. ►►►

When I started drafting a post explaining how I came to adopt solo travels, I never expected to have THAT MUCH to write… so I thought that I would break it in 2 parts, to make it an easier read! ►►►