Earlier this year, Gabor Lukacs (founder of AirPassengerRights.ca) was featured on this blog, following his filing of different recourses in order to fight for airlines passengers rights, including those of plus-size travelers. Gabor Lukacs made the news last April as he was about to appear in front of three Canadian judges of the Appeal Court. His goal? Make sure the Canadian Transportation Agency would address his complaint about Delta’s “plus size passengers” policy, even if his own rights weren’t denied (as he is not affected by this policy for being “standard size”).

(In case you missed the original 2-part interview, you can find part 1 HERE and part 2 HERE.)

In September, the decision came out and the news were good : he won his appeal and was authorized to represent “large” (a.k.a. “plus-size”) passengers, even though he isn’t one himself. Though it’s a step in the right direction, there is still obviously a lot to do. 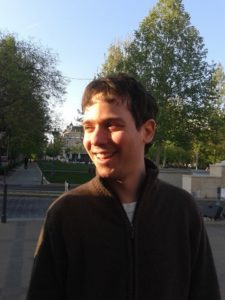 In a nutshell, could you summarize the case in which you and “Omer” are implicated and the circumstances of the original recourse against Delta?

There is a misunderstanding about who “Omer” is. He was not an overweight passenger, but rather he was sitting next to such a passenger, and wrote to Delta to point out that his seatmate should have been properly accommodated. In response, Delta sent Omer the incriminating email, in which the airline admits its discriminatory practices.

CLICK HERE to see the email in question (opens in a new window).

You recently won an appeal at the Canada’s Federal Court of Appeal allowing you to represent the interest of overweight/obese passengers, even though you are not one yourself, in a case against Delta. What is coming next?

The Canadian Transportation Agency will have to decide, on a basis other than “standing”, whether it will inquire into the substance of the complaint.

Based on the Agency’s track record for the past 2.5 years, I expect that they will come up with another excuse for not dealing with the substance of the complaint. If so, I will review their reasons, and will seriously consider appealing again

My sense is that the Agency is determined to shield airlines from any meaningful scrutiny, has been acting in bad faith to defeat the very purpose for which it was created by Parliament, and will continue acting that way unless there are some radical changes within the organization.

I fear that it might require a public inquiry before the Agency would change its ways.

Now that it’s been granted that you can represent people without having “to be a member of the group discriminated against in order to have standing”, are there any other groups or categories of passengers you are thinking of representing? In our previous Q&A, you mentioned “the vertically plus-sized (very tall)”…

Vertically plus-sized passengers are certainly on my list; however, I am concerned that because of the current biased attitude of the Canadian Transportation Agency, such a complaint would be blocked no matter how strong it would be.

The bottom line of the judgment of the Federal Court of Appeal is that the Canadian Transportation Agency has not been carrying out its mandate. While the court has done its part in correcting the error of law, it is the government that should intervene and direct the Agency to do its job.

Until that happens, I would urge passengers to take airlines to small claims courts, and avoid the Canadian Transportation Agency at all costs. Currently, it is institutionally biased against travelers and will rubber stamp almost anything that airlines do.

The idea of flying as a plus-size passenger can turn to a phobia for many of us, chubbier travelers. While leg room is an issue for almost all adult passengers, the width of the seat is our very own plus-size nightmare.
►►►

A bunch of stuff happened – or is happening soon – since my last post and during the month of March, so many things that are of interest to us, and I wanted to share them with you, so here it is, in no particular order… ►►►